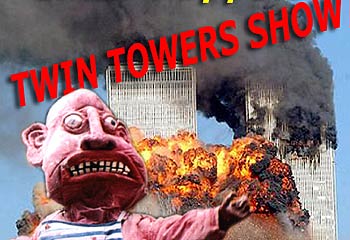 Further to yesterday’s post on the genre of Black Comedy, a little bit of controversy has arisen today.

A chronicle of the September 11 attacks on the World Trade Centre, the show that many will no doubt find offensive, is nevertheless an excellent example of Black Humour (post script: after having just seen the film World Trade Center, perhaps ‘brutal’ example, may be closer to the mark).

At the very heart of Black Comedy is the notion that the majority of its audience will find the method in which sensitive subject matter is tackled, as inappropriate.

Black Humour is not meant to be pretty. It is often grotesque and its aim is to mock things we sometimes regard as sacred.

Here is a 1993 fictional film account of one of the more mysterious thinkers of modern theatre, Antonin Artaud. Good Internet resources on Artaud are difficult to find and generally speaking his theories on theatre…

Next in a week of posts relating to performance art on The Drama Teacher is the emerging duo Clark Beaumont. Sarah Clark and Nicole Beaumont typify a younger generation of performance artists. The two Brisbane-based… Although evident for decades in a small number of Hollywood films, the so-called Jukebox Musical is only a relatively recent theatrical genre. Jukebox Musicals are called so because they centre around an already existing catalogue…

Promenade theatre normally involves outdoor performances in public places, such as city laneways or town streets. Multiple locations for staging is common (though “stages” as such, are not), with the audience asked to move throughout…