The theatre of the absurd was a short-lived yet significant theatrical movement, centred in Paris in the 1950s. Unusual in this instance was the absence of a single practitioner spearheading the form. Largely based on the philosophy of existentialism, absurdism was implemented by a small number of European playwrights. Common elements included illogical plots inhabited by characters who appeared out of harmony with their own existence. The typical playgoer had never seen anything like this on the stage before. The theatre of the absurd will be remembered in history for many things, the most significant of these being Samuel Beckett’s masterpiece Waiting for Godot, one of the great plays of the 20th century. Absurdism is commonly studied in senior high school and university drama and theatre courses. Below are the main conventions of the theatre of the absurd.

Existentialism refers to a particular view of the nature of man’s existence. The existentialist believes that man starts life with nothing. His life is made up of acts; through the process of acting man becomes conscious of his original nothingness. By choosing to act, man passes into the arena of human responsibility which makes him the creator of his own existence. However, the existence inevitably ends with death. Man returns to his original state of nothingness. This existential notion eliminates the Western concept of man’s exalted nature. Life becomes meaningless and useless – a condition which is in essence “absurd”. Man’s only freedom in this condition is the exercise of his conscious mind. However, consciousness means conflict – between man’s awareness of the absurdity of his existence and his need for justification of his human action. (J. L Crawford: Acting In Person and in Style)

For Camus, the legendary figure of Sisyphus was the prototype of an ‘absurd’ hero, condemned by the gods forever to roll a rock to the top of a mountain, only to have it roll back down again by its own weight. He represented the epitome of futile labor and pointless existence. Although Camus denied any connection with Sartre’s existentialism, the book (Sartre’s The Myth of Sisyphus) became a manifesto for the new existentialist drama, and later for the theatre of the absurd. In it, Camus asserted that it was legitimate and necessary to wonder whether life had any meaning. He described how man felt himself to be a stranger in an alien world, and believed that this divorce between man and life was properly ‘le sentiment de l’absurdite’, the feeling of absurdity. (J. L. Styan: Modern Drama in Theory and Practice 2)

On the plot of Samuel Beckett’s play Waiting for Godot – Vivian Mercier, The Irish Times, 18 February, 1956.

… the absurdists, while for the most part accepting Sartre’s philosophical outlook, tended to concentrate upon the irrationality of human experience without suggesting any path beyond. By employing a succession of episodes unified merely by theme or mood instead of a cause-to-effect arrangement, they arrived at a structure parallelling the chaos which was their usual dramatic subject. The sense of absurdity was heightened by the juxtaposition of incongruous events producing seriocomic and ironic effects. (Oscar G. Brockett: History of the Theatre) 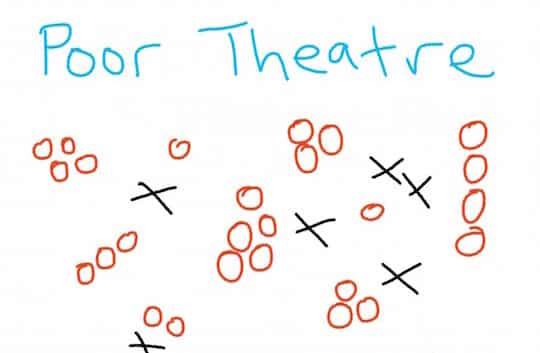 Adding the use of symbol in a student drama performance is a difficult task. But when symbol is weaved successfully into either classroom drama or professional theatre, it adds sophistication that places the show on… This 1980s documentary on German theatre practitioner Bertolt Brecht and his staging methods is still a useful resource for Brecht lovers! Posted here in three parts, the video discusses several of Brecht’s plays and how…