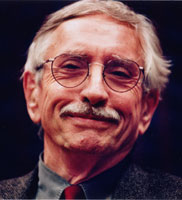 Whoa! It’s been a while between posts. Wish I could say I’ve been slacking off, but sadly, this is not the case. Life’s been a bit hectic lately.

I just watched a wonderful interview with one of America’s best known playwright’s, Edward Albee, on ABC’s Sunday Arts program. I thought I’d share with you some of Albee’s quotes on the modern theatre and the craft of playwrighting from this interview:

Of the eighty or so plays that get produced on Broadway each year, only two or three of them are any good. The rest are just commercial junk.

(Albee is a voting member for the annual Tony Awards and sees the vast majority of plays on Broadway every year).

The best playwright of the first half of the 20th century was Checkhov; of the 2nd half … Beckett.

A good play is a play that leaves its audience with more questions than answers.

I have to get to know my characters very well before I trust them to be in one of my plays.

If you don’t have a play on in New York City, you don’t exist.

I love being a writer. I love writing plays.

I have felt more allied with European playwrights like Checkhov, Pirandello, Brecht and Genet than with American playwrights (like Williams, Miller etc).

There is no relationship (in stage plays) between excellence and popularity.

How long should a play be? As long as it needs to be, not the usual hour and three quarters that most plays are.

Don’t be trapped into conforming. A play only needs to conform to its own rules.

Albee was critical of the fact that American audiences only ever hear of success (or otherwise) on Broadway. Hence his quote about not existing if you don’t have a play on Broadway. He implied Americans know very little about plays on Off Broadway, Off Off Broadway or in Europe, where he has had much success.

Albee seemed a bit surprised about all the attention that has been paid over the years to his most famous work Who’s Afraid of Virginia Woolf? The playwright readily admitted he has written other plays that were of equal quality, but were commercial flops and that several of his other plays are more interesting than Who’s Afraid of Virginia Woolf?, partly because of their more complex structure.

Of his 27 plays spanning several decades, today about five or six of these bring him regular income in royalties … including Who’s Afraid of Virginia Woolf?, The Zoo Story (on many American university theatre textbook lists) and Three Tall Women.

Here I am making a post in a busy (and noisy) junior technology class. Just like in Drama, my students are having fun. But (perhaps unfortunately) many of them associate enjoyment with noise. A couple…

German theatre director Erwin Piscator (1893-1966) may not have been the first person to use projected images or film in stage plays, but he was certainly a pioneer in this area and one of the first to…

Working Conditions for Teaching and Learning in Drama is a position paper developed by Drama Australia, last updated in April 2009. While written for Australian schools, it nevertheless serves as a very worthwhile guide for Drama…