In senior Drama yesterday we were undertaking theory work on Jerzy Grotowski’s Poor Theatre style. It is only now that my students are coming to realise that they have been doing “Poor Theatre” since Year 7. No sets in their drama skits, few props (many of which were transformed into other objects mid-performance) and the actors were always central to the drama.

No dazzling stage lights, glittered costumes or fancy make-up; just a few tables, a couple of chairs, sheer talent and a helluva lot of enthusiasm! But it is now that they understand all this has a name and was actually a form of theatre popularised (and simultaneously secret-ised) by Grotowski in the 60s and 70s. 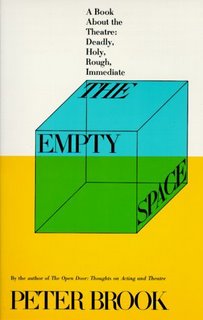 Their understanding of Grotowski’s ideas were further enhanced by a simple quote from Peter Brook’s seminal theatre text The Empty Space. The sparseness of Grotowski’s performance needs were likened to those famous opening lines of Brook’s:

I can take any empty space and call it a bare stage. A man walks across this empty space whilst someone else is watching him and this is all that is needed for an act of theatre to be engaged.

This quote, if given to students at the start of a senior Drama/Theatre course, will really allow them to have a more sophisticated understanding of theatre’s possibilities with all the material they create in the future. Because if they understand what Brook is saying here, then they understand what stripped down theatre can be in its most basic form. From here, the possibilities for performance are limitless.

So, what is the most intense theatre I have seen in the past five years?

A fight in the schoolyard of a boys’ school where a ring of spectators, gladiator style, through a system of unspoken codes and conventions, milled five-deep in a circle around the action in less than a minute.

The last time I ‘went’ to the theatre?

This afternoon at my school’s annual swimming sports carnival, where groups of girls cheered their friends along, parents observed the action quietly from a distance at the sidelines, while other students chanted and danced at the edge of the pool. All this time, the real theatre was happening over eight lanes of water inside the unofficial theatre.

So, in the vein of Jerzy Grotowski, ‘theatre’ doesn’t require glamorous sets and costumes in order for it to occur.

And in the words of Peter Brook, ‘theatre’ doesn’t even require a ‘theatre’ in order for it to be meaningful and real……..