One of the most intriguing and challenging of non-realistic theatre styles for high school drama students is theatre of the absurd. Its beauty lies in its non-conformity with accepted theatre conventions. A performance style that deliberately breaks many of the norms of conventional theatre is destined to do one of two things to its audience – fascinate or alienate.

Historical Context: Students of theatre first need to understand the context of absurdism. Emerging in Europe in the early 1950s, theatre of the absurd arrived soon after World War II, which has been considered a major influence on the style due to the senseless atrocities on human life. Contemporary students of theatre will tell you New York and London are the two big theatre cities of the world today, but we must not forget Paris was the hub of artistic endeavour in the 1950s and it is no accident playwrights like Samuel Beckett were living and working in Paris at this time.

Practitioners: Many modern theatre styles originate from essays and practical experimentation of techniques by a single person. Although Brecht collaborated with others such as Erwin Piscator, he experimented tirelessly with his ideas at his own Berliner Ensemble. Stanislavski did the same with the actors and plays at his Moscow Art Theatre. Grotowski was a true experimenter with his aptly titled “Theatre Laboratory” in Poland.

But theatre of the absurd began differently. It was in many ways an unconscious movement. The term itself was not coined until 1960 by theatre critic Martin Esslin. Today a small number of playwrights are considered the main contributors and importantly they were all playwrights. Their plays, as opposed to their essays on theatre, were their exponents of the style. While we assume they were indeed aware of each others’ writings in different European countries, we must remember that while new plays were often published, this was not the era of email and Twitter when one wanted to make another aware of his artistic works. The true absurdist playwrights are few: Samuel Beckett, Eugene Ionesco, Jean Genet and Arthur Adamov.

Existentialism: You can’t possibly teach theatre of the absurd without first teaching your students the notion of existentialism. This was the philosophical background to the types of plots, events, characters, themes and actions of many absurdist plays. But existentialism isn’t exactly the easiest thing to teach to a 17 year-old student. An abridged version of the Albert Camus essay The Myth of Sisyphus is a good start. In the story, Camus shows us this figure of Greek mythology relentlessly pushing a boulder up a hill, only to see it roll down again. It is a metaphor for what existentialists believe is man’s futile existence in a world devoid of any God, where as each new day passes, man comes closer to his ultimate surety of death. If man does have purpose in his life, he must make this purpose himself and control his own destiny through his choices and actions, which may bring some degree of hope. Many characters in absurdist plays are examples of an existential existence and this is where students need to make very specific discoveries in plays studied in the drama classroom.

Conventions: Absurdist conventions can include language devoid of any real meaning (unintelligible, clipped, repetitive, cliches), plots that are circular instead of linear (appear to go nowhere), slapstick and vaudeville-type actions (yes, there is comedy in theatre of the absurd), characters that have little or no sense of time or place (they forget where they are, do not recall previous events the audience remembers, do not know what day it is etc), long moments of silence, slow paced sections juxtaposed with fast paced dialogue.

Absurdist Plays for Students: As the primary example of the form, absurdist play Waiting for Godot is a must to teach to students. But this play is also one of the hardest for teenagers to grapple. I have found it best to read and perform sections of the play text, coupled with improvising the play’s themes and watching excerpts of the Waiting for Godot DVD, part of the excellent Beckett on Film series.

As a scripted scaffolding technique en route to the almighty Godot, I have used Australian playwright Matt Cameron’s work Mr Melancholy. When you have a play with three hermits alone on a beach, while a clown arrives from the sea in a suitcase, you know you are in for a strange but wonderful drama. Mr Melancholy uses many of the concepts and conventions to be found in Godot (loneliness, isolation, meaningless existence), so the similarities are there for students to discover between the two texts. But Mr Melancholy’s characters are less complex than those in Godot; their naivety and childlike nature making them more accessible than Godot’s Vladimir and Estragon for teenage students of drama. I have been workshopping scenes from Mr Melancholy at Year 11 Drama for some years now and I am yet to find a class who have not enjoyed this gem of an absurdist play.

Over the years, I have also used Eugene Ionesco’s play Rhinoceros with senior theatre students. The very concept of the inhabitants of a French provincial town turning into Rhinoceroses simply fascinated my students. This superficial curiosity soon turned into intellectual discussions when we studied the deeper meanings behind this play and its characters.

Conclusion: Theatre of the absurd in a high school context is a beast. Weaker students often struggle to understand the layers behind the surface with absurdist dramas and are sometimes bewildered at the non realistic conventions unique to this form. On the flip side, stronger students who love drama theory and class debates usually revel in the complexity of absurdism, from the philosophy of existentialism through to the reasoning behind strange characters and events in absurdist plays. These students sometimes ask more questions about this form than the teacher can answer. How you teach absurdism and to which year level at school is the drama teacher’s challenge. But one thing remains true, absurdism is too good to leave off your senior curriculum and ignore! 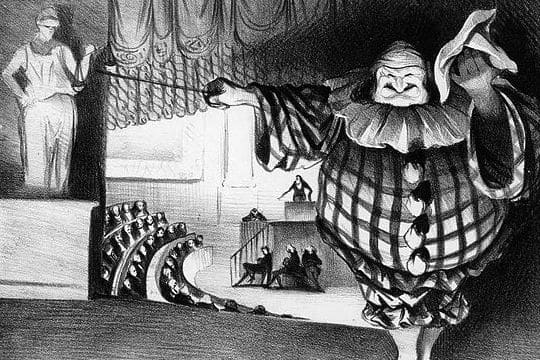